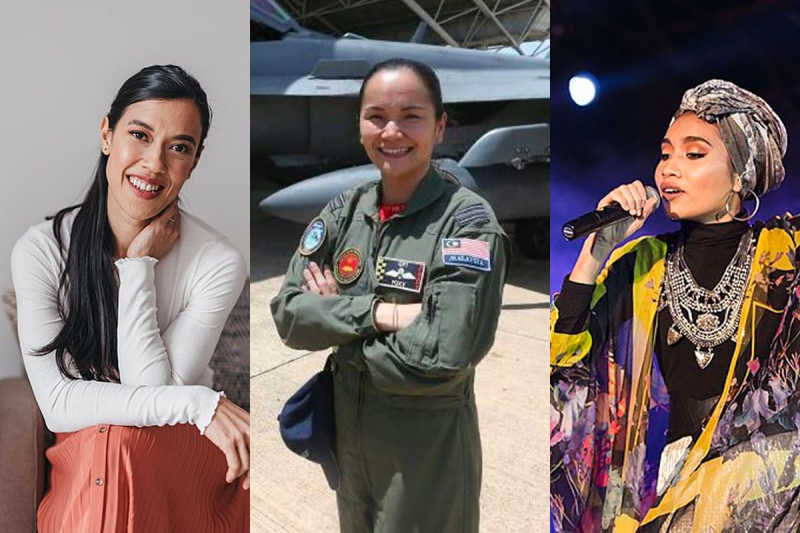 Jiran celebrates International Women’s Day by bringing you stories on Malaysia’s leading women and their triumphs. Read on to find out more about how these inspiring trailblazers shattered the glass ceiling to carve out their own places at the top of Malaysian society.

When Datuk Rasammah was 16, she became a soldier for the Rani of Jhansi Regiment, one of the very few all-female combat regiments during World War II. She fought against British colonialism then; now, she continues to fight for various social causes ranging from women’s rights to education.

In 1960, she co-founded The Federation of Malaya Women Teachers Union (WTU) which fought for equal pay for everyone, regardless of gender or race. They finally won that war four years later when equal pay was ratified. In her own words, “as a leader, there are times when one must be a loner to maintain integrity, accountability and honesty. But then, I have never been the type to keep quiet when there is a need to speak up.”

Mejar Patricia Yapp Syau Yin is the first MiG-29 female fighter pilot in Asia and the only female fighter jet pilot in Malaysia. She became interested in aviation when her older brother became a pilot, but her parents forbade her from pursuing her unconventional dream. Undeterred, she bravely applied for the Royal Malaysian Air Force (RMAF) cadet programme in secret whilst in her second semester studying law.

Currently, she deftly balances her job overseeing the RMAF’s training and her family, raising two children with her husband. Having served the RMAF for over 20 years, she believes that she will never stop serving her country. She proves women with courage and discipline can fly through life to succeed personally and professionally.

Datuk Nicol Ann David was born in Penang and is one of the most accomplished squash players of all time, of either gender. Her achievements include an unprecedented nine years at World No 1, eight World Championship wins, five British Open titles, two Commonwealth Games gold medals, five Asian Games gold medals and three World Games gold medals. Recently, she was crowned the World Games’ Greatest Athlete of All Time.

Nicol won the Order of Merit (Darjah Bakti) or DB, the very first recipient of this award which may only be given to 10 people who have made extraordinary contributions to Malaysia. She also received the Darjah Setia Pangkuan Negeri award (DSPN), which carries the title Datuk, making her the youngest person ever to be conferred a Datukship in Penang. Former Prime Minister Abdullah Ahmad Badawi, also a Penangite, joked that she is “now more famous than me!” She also carried the torch for Malaysia during the build-up to the Athens Olympics of 2004. When she’s not shattering squash records, Nicol serves as UNDP National Goodwill Ambassador for Malaysia.

Born and raised in Kedah and Selangor, Yuna began writing songs at 14 and soon taught herself guitar. She collaborated with Usher on her breakout single “Crush” which peaked at number 3 on the US Billboard Adult R&B chart.

She has won numerous awards and nominations since then, including Most Successful Malaysian Singer from The Malaysia Book of Records. Best known for her iconic headscarf, Yuna fearlessly embraces her religion and her passion for pop music stating, “I’m a Muslim. I don’t try to hide it. I’m also a girl who loves music. And I don’t try to hide that as well.”

5. Salma Ismail: first Malay woman to qualify as a doctor

Gone but not forgotten, Tan Sri Salma binti Ismail was the first woman from Kedah to pass the Senior Cambridge examinations with distinction. After 11 years of training, she became the first accredited female Malay doctor. She was appointed Royal Midwife to Sultanah Bahiyah, and received the Bintang Cemerlang Kedah and Dato’ Paduka Mahkota Kedah awards in 1957 and 1996 respectively.

In 1997, she won the Panglima Setia Mahkota award which granted her the Tan Sri title. Her oldest son remembers her principles as, “have confidence in yourself, be honest, don’t talk badly of others and give help to those who need it.”

From medicine to military to sports, these fascinating and boundary-breaking women refused to conform and didn’t just survive in their chosen industries, but thrived. Happy International Women’s Day!

#ChooseToChallenge by supporting female-led businesses in your local community. To discover your treasure map of homegrown brands, make your way to Yellow Pages Malaysia.